This Month in Real Estate

The Louisville, KY real estate market is still proving to be a great situation for home sellers. Buyer demand continues to increase through the end of spring with low inventory available. 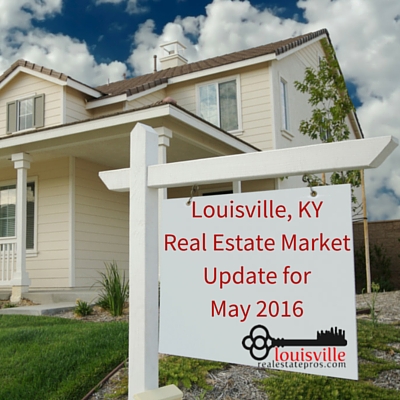 Thinking about selling your home this season? It continues to be a seller's market!

The real estate market here in Louisville, KY is continuing to look promising for those planning to sell their homes. March’s market statistics have recently been reported, and the data proves that now remains a great time to sell. Far fewer quality homes were available in March when compared to the same time last year; only 5,195 active listings were available in March 2015 compared to 6,147 active listings in March 2014. This is an inventory decrease of 15.5%! Such high demand is great news for sellers.

High demand predictably drives up prices as well. (It’s another piece of good news for home sellers!) Average selling prices of homes in March 2015 show an increase of 13.3% from last year. (The average price was $186,600 versus $164,700 in 2014.) Home buyers continue to fight for a new place to call home, and they prove it through increasing the amount they are willing to pay. If you are thinking of listing your home, begin the process soon to get a piece of the action. Buyer competition is truly intense right now!

The actual number of houses sold so far this year once again support a seller’s market. February’s statistical report showed that Louisville had a 6.3% increase of year-to-date homes sold. March’s numbers show an even greater increase! Sales are up 8.3% for the year. 2,891 homes have already been sold, and that number is rapidly growing.

There hasn't been a better time to sell!

February’s statistics have been reported for the Louisville, KY real estate market, and it is evident that now is a great time to sell your home. Inventory is down 11% (6,065 properties in February 2014 versus 5,397 properties in February 2015). With a lesser number of houses available, demand inevitably increases. Last month, sellers saw multiple offers placed on their properties simply because of the high demand. Buyers are fighting for the perfect home!

Year-to-date sales support the fact that Louisville’s market is strong as well. With an increase of 6.3%, we have seen 1,732 properties sell so far this year versus the 1,629 homes that had sold up until this point in 2014. Buyers have clearly begun to search for a new home early this year; the spike in sales is usually seen in the spring to summer months.

Not only are more homes selling, but the average selling prices are higher too. In February 2014, average prices were just under $159,000. This past month yielded an average selling price around $172,500. Again, the high demand for quality properties forces more competition between buyers and high price points to match. ...

The 2014 statistical reports are in for the Louisville area, and it is clear that now is the most beneficial time for local sellers to list their property. When comparing the year-end numbers of 2013 to those of 2014, a large decrease in active listings can be seen. Louisville MLS inventory is down 11%, so the demand for availability of quality property is high. December came and went with records lows of just over 6,000 listings in all of Jefferson, Oldham, and Bullitt Counties combined. Compare this to the more than 9,000 homes that were listed here in Louisville, KY during our housing market’s worst years (2008-2011), and you can see that the odds of properties selling quickly are definitely high. When analyzing the 2014 year as a whole, a 2.7% increase in the average selling price (just over $180,000) shows the Louisville market is returning to a healthy rate of appreciation.  The lack of an abundant supply of nice homes for sale has helped increase prices as well.

With the comparatively low number of houses currently available for buyers, the spring rush has begun early for 2015. The high number of interested buyers, coupled with the decrease in valuable inventory available in Louisville, inherently creates a competitive market this time of year. If you are planning to sell your property during 2015, the best time to list is NOW. The Louisville real estate market needs your quality listing to meet current home buying demands. Homes are selling quickly with the limited options available to buyers.

Louisville and the surrounding area is truly a seller’s...

Check out the video on this month in Real Estate: February 2013. Also talks about the top eco features home buyers are looking for in their next home purchase.

We are seeing marked improvement over the stagnant numbers reported in the last several years and it is clear that we are on an upswing here in the Louisville Real Estate Market.  The numbers show that more people are buying and selling homes this year. This is great news for current and future home-owners, and exciting for real estate agents across the Louisville area.

Louisville has continued to have growth in the housing market this year. The number of homes sold in May of 2011 compared to May 2012 is up by over 14%! We have also seen an increase month after month on home sales since January of this year. Homes are moving fast, making this an ideal time to enter the housing market. Home values are going up as well! The average home value has consistently increased since 2009 with {the average} home valued at almost $14,000 more now than in 2009! Pair this with record low interest rates, and homeownership is a very real possibility for those looking to invest, relocate, or upgrade into their dream home.

At the Ruckriegel group, we stay informed of the market numbers so that we can pass that knowledge on to you. It is important for our clients to have the most up to date information when making decisions on a home sale. We would love to help you take advantage of the current opportunities in the Louisville Housing Market. Contact us today to get started!